An assortment and sampling of the ideas that run through my head:

Posted by chamoisee at 4:51 PM No comments:

At school everyone calls me by my actual name. At first this felt really weird. Now it seems strange to be called Rebekah. Actually, the long form of my name feels excessively formal. Not sure I like that but don't quite know what to do about it.

The sysbot test was today. I studied all three days of the weekend, even went on a field trip to see the trees in more detail and in different situations, etc, to get a solid feel for the big picture...studied notes, rewrote them and was quizzed, and read and reread the flora (Hitchcock's Flora of the Pacific Northwest). It seemed a little like overkill, but I had a feeling that the test would be challenging. Ah. It was. I am soooo glad I studied. I know I got several questions wrong, but it would have been quite the nightmare had I not gone all out. And next time, I will study even harder. The class is *fun*, but it is not  a cake walk. I can't gripe, though. Fact of the matter is that since I love the subject, studying for it is no pain at all.

Next week: Math test. I think I am finally catching up on the math.

Socially, am making more acquaintances. I am still not very good at small talk, despite a conscious effort in this direction. I don't have a lot of small things to talk about. For me, nearly any subject can lead into more depth or perspective or tangents, and people don't seem to like that. A lot of them want the small talk comments to be short little sound bites, but then what do you say? Another little sound bite? How do you know when to switch from one trivial topic to another? People get bored so easily. They have no attention span.

Posted by chamoisee at 9:28 PM No comments:

Finally figured out how to post images. Hmmm. Also just noticed that blogger has a lot more options easily accesible than when I started this blog. I used to use html for everything from bulleted lists to italics (still do, actually), but it appears I don't really have to anymore...not that's it's been any great effort to use html.

At any rate, the two pictures below are of some of my art from 2007; an artichoke and a cherry turnover. I'll have to ferret out some more and post that too. The orchids are blooming wildly and tempting me to take an hour or two to draw them...but, I have to finish my Pseudotsuga menziesii page in my botany notebook. I drew only half of the pinecone. This isn't making much sense. I suppose I'll have to post a page from that notebook in order to articulate what I mean.

Oh, and I saw a male black-backed woodpecker while XX skiing yesterday! Also, a single Taxus brevifolia, Acer glabrum and a lot of diverse pseudotsuga (and other trees) under different conditions, which highlighted how variable the trees can look depending on their situation. Phenotypes and all that jazz.

Posted by chamoisee at 4:49 PM No comments: 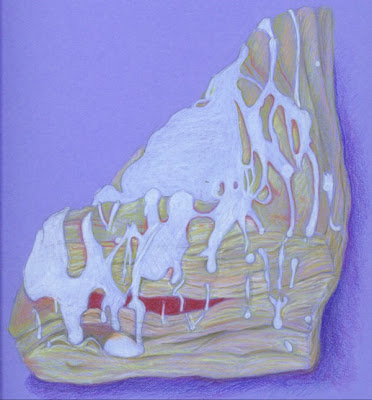 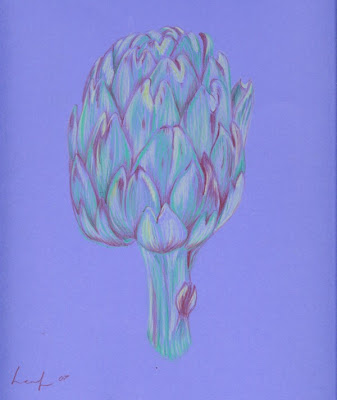 Posted by chamoisee at 4:19 PM No comments:

I haven't had goats for a couple of years now, and it's been longer than that since I've shown them or had an active breeding program. At one time, I had aspired to be a dairy goat judge, not for the power or control or prestige, but because I really enjoyed evaluating the animals. The late great Harvey Considine, who I had the incredible honor of meeting and chatting with, thought I had a good eye for the work. He told me something I found funny at the time, that his father (I think?) who was also in livestock (although not dairy goats) had a habit or looking at people's feet, at the way they walked. Oddly enough, this habit has become mine. I think I pay more attention to human feet and general movement "on the move" (good dairy goat judges judge the animals while walking slowly, not when primped and posed artificially) than I do their faces.

Harvey was right...you can tell and learn a lot by watching people move and walk, and by observing their shoes and feet. Very obese people, for example, tend to have lower legs that splay out at the knees. I haven't decided yet whether this is because they need extra stability for the added mass, or if the added mass of the thighs forces the lower legs (and therefore the feet as well) outward. Watching them walk is painful...you know that their knees must hurt, and that the more those knees hurt, the less they'll want to move around and exercise, creating a vicious cycle. Very musclular men who work out a lot move their upper bodies differently and with less mobility than leaner men do, as though constrained. High heels tend to predispose women to take a sort of stomping, stabbing motion with their walk, which makes their rear ends more noticable, but in my opinion, deprives them of a certain grace and flow, too. I've also noticed that people (usually men) who take what seem to be carefully measured, precise, and intentional steps tend to be pretty methodical and well, precise. People with flat feet stand very differently than others, with their toes pointed out and an entirely different stance.

So I suppose it was only a matter of time before I noticed my own walk. It's my right foot/leg, the side that's shorter, the side whose hip bothers me more. That hip swings out at a different angle than the other one. It has more limited range of motion in some directions, but in a normal walk, I can feel it moving differently, swinging out farther. Since there's snow, I watch my prints. They're not symmetrical. That right foot hits the ground at a different angle, and the hip joint moves as it hits the ground, as I put weight on that foot. It's a decidedly disagreeable sensation even though it doesn't hurt most of the time. I guess that at this point, I could throw myself a little pity party because I'd like to run and romp and climb and jump like I used to and now these activites are very limited (and I pay for them later), but that seems pretty trite. What I'm concerned about is the possibility that whatever's making my hip joint move in this funky way is going to *really* limit my mobility later on. if I believed in a god, I would scream to him that I need to be able to enjoy *something* in life, and I don't want to live in a little cubicle, dammit. I need to breathe the fresh air and feel close to the trees and melt into the outdoors. I want to be climbing trees when I'm 70 or 80 years old.

Screw it. Forget god. I don't care if I lose both my legs, I'm not giving that up. I lost the goats, I've lost so much else...I am not losing the entire outdoors, too. Ugh, I'm ridiculous, who said I was going to lose my legs, anyway??
Posted by chamoisee at 8:14 PM No comments:

Maybe there isn't such a disparity bewteen botany and art. Many botanical books have extremely detailed, meticulous botanical art, not photographs, or art and photographs. Also, I think drawing plants (or anything else for that matter) is the best way to really know it. once you draw something, it's like it becomes a part of you, and in turn, a part of you has been invested in that drawing.
Posted by chamoisee at 5:32 PM No comments:

Ha, that's really funny. I have 444 posts (not counting this one). That's so perfect that it's tempting to quit posting. 4 is my favorite number.

More detritus from my mind:

I kept smelling something incredibly seductive and couldn't trace it as I am pretty much alone. I finally figured it out- the scent of trees and forest on my hands. Yeah, that's right, trees. On my own hands. I am so weird!!

Today I saw: coyote, weasel, and rabbit tracks, Pinus ponderosa, monticola and contorta, Abies grandis, Thuja plicata, Tsuga heterophylla, Pseudotsuga menziesii, Mahonia repens (I think it is repens), Larix occidentalis, Oplopanax horridus, Acer glabrum, and of course the usual verbascum, etc... The weasel tracks came from and went to small holes in the crust of the snow; apparently weasels tunnel underneath the snow crust, which is pretty cool. There were almost no birds, although I saw plenty of evidence of bird activity.

And I'm finding myself more interested than I ever thought I would be in conifers. I wish that I had acerage to grow, side by side, all the Abies, Picea, Pinus, etc species (each genus in groups, I mean). The cones are incredibly interesting and appealing. Before, they were squirrel food and fire starter. I would never have imagined that I could get enthused about the same trees I've been living near, splitting into firewood, playing under, working with, climbing....well, maybe. Maybe I was this way all along and didn't realize it. I think though, that there's a tendency to romanticize about non-native species of plants while failing to appreciate what we have growing in abundance and splendor all around us.

And I still can't decide if I'd rather be a dcotor or a botanist, or what sort of botanist I'd be. In spite of myself, I still yearn to paint the pinecones, the verbascum, the patterns of the twigs. I wish with all my heart that I could make a living that way, and I know better.
Posted by chamoisee at 1:22 PM No comments:

That is all. Never mind, move along.

(nonono)
Posted by chamoisee at 7:36 PM No comments: