This is Copper. We got them home safely in the back of the van last night. I was able to reach Jefferson's halter and clip a lead rope to it, but couldn't reach Copper. My 9 year old didn't want to climb in there to clip Copper up for me and I felt too big to fit easily, so foolishly, I had my 17 yo son lead Jefferson out while I tried to keep Copper in until I could put his lead rope on. I forgot that alpacas are not goats. Alpacas have a much lower panic threshold than goats do. Copper freaked when his friend left the van without him. He tried to jump out, I was afraid he'd get loose and be impossible to catch so I grabbed him...hit the ground hard, with alpaca thrashing around above me, we flailed around for about ten feet before he stopped and I was able to clip him up. He was so scared! Who wouldn't be after having a human clinging to their neck despite one's best efforts to get free? I am glad alpacas don't have real hooves- there would have been quite a bit more damage. He didn't intend any harm though, just wanted to be with his herdmate.

This morning they are all settled in. Oddly, Jefferson is the one giving me dirty looks while Copper seems to want to be friends! 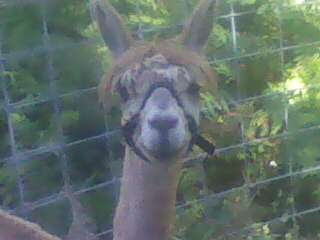 Posted by chamoisee at 1:14 PM